Made in the USA | VETERAN Owned & Operated

Uh Oh... Your cart is low on Iron...
You should shop →
Product is not available in this quantity.
ABOUT US
Who We Are

My family and I are patriots that enjoy making unique products for your kitchen. Our inaugural product was The Great American Waffle Iron. A waffle iron is one of the more difficult pieces of cookware to design and produce. Our foundry had to be accurate to within a few thousands of an inch for it to function properly and safely since it is piece of cookware with moving parts. I have never been accused of doing things the easy or normal way, so we started off with a Big challenge.

Our "Jeweled" line of cook/ table ware is another example of our work that I hope captures your eye. The lessons learned during the design and production of The Great American Waffle Iron, gave me the freedom to get creative with our cookware design. Certainly cookware should perform excellently. We also think it should have an excellent appearance. 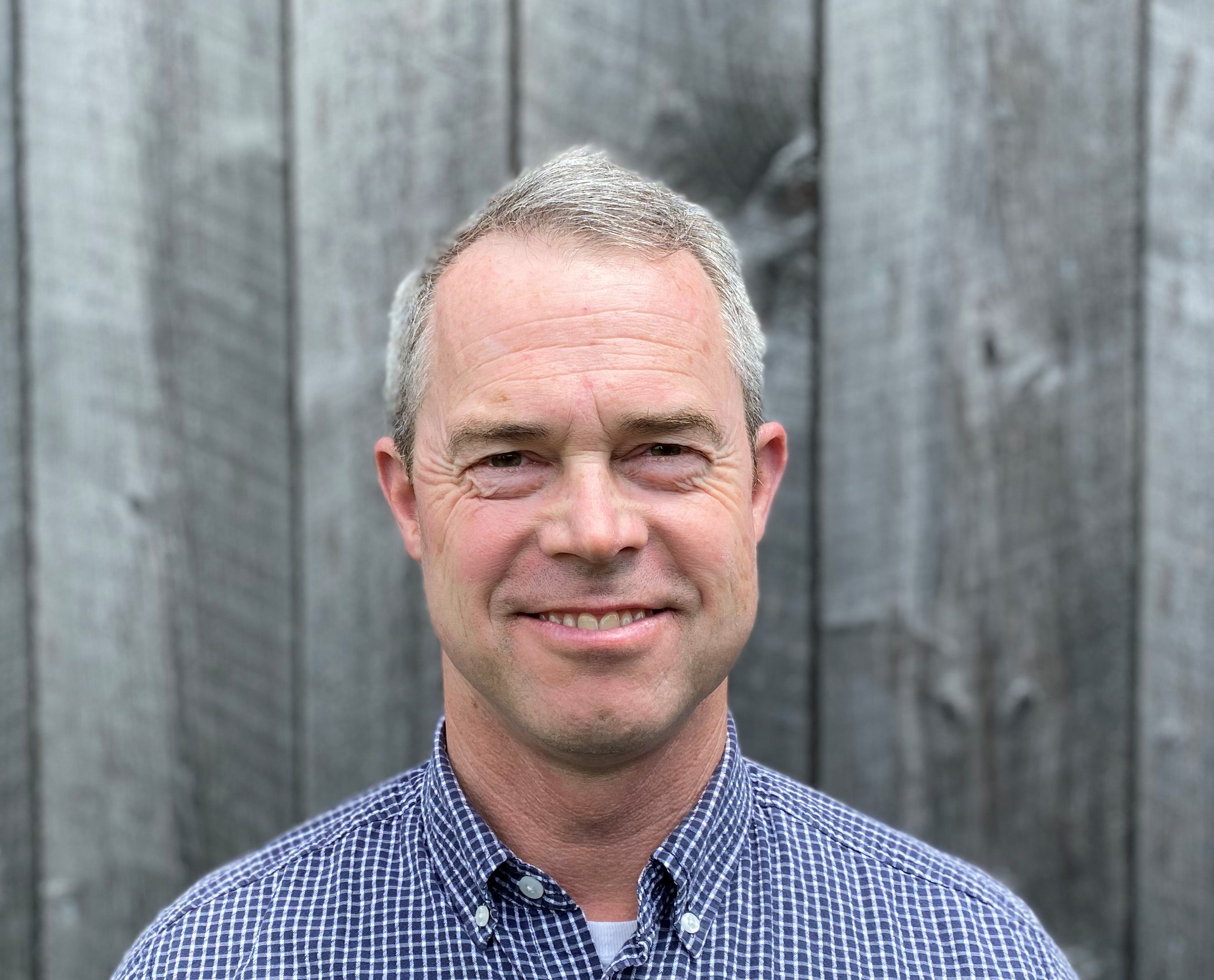 Tony Hester
Status:
This is some text inside of a div block.

ABOUT US
Our History

For the past 30 years I have been fascinated by antique waffle irons and have collected many.  After cooking with my very first one, I immediately reached into my cabinet, pulled out my electric waffle iron, and dropped it into the trash bin.  It was only a few years old and already had damage to the non-stick coating and I knew the plastic legs weren't going to last either.  However, now I had a real, permanent, cast iron waffle maker, a 160 year old North, Hamilton and Chase. There was no turning back.

I first pondered the idea of producing a waffle iron in the late 90’s.  It seemed like a very expensive and insurmountable task for one person without a small fortune to gamble with.  And it certainly would have been a gamble.  I wanted it to be made in the US.  Price was an overwhelming concern.  Plus, I did not know anything about setting up stocking agreements with stores.  Over the past decade or so, the internet and ecommerce developed to the point that I began to re-visit my dream.

As my children grew up, making waffles quickly became a tradition in our house.  It was a special privilege to be the one to pick which waffle iron we would use that Saturday morning, taking turns from week to week. Our antique waffle irons feature a variety of artwork and everyone has a favorite.  Those antique waffle irons are like revered older relatives that deserved to have their story’s told.  Even if a specific one wasn't an absolute favorite, it made it in the rotation.

When guests were in town for the weekend, they often were given the opportunity to pick which waffle iron would be used for breakfast.  This meant that each waffle iron had to come out of the pantry and be presented.  My children would excitedly tell our guests about all the details and cooking characteristics of each.  It is a wonderful thing to see your children explain to another person in great, animated detail about the many technical and artistic nuances of a practical and cherished object like our waffle irons.   I knew more families would benefit from this simple experience.  My dream was slowly rekindled.

As a family, we began to imagine how we would bring a cast iron waffle iron to others.  We looked at the features and art on our antique waffle irons and knew we wanted to do this right!  It was at this point, that Appalachian Cast Iron started to become a reality.  We discussed at length, many, many times and explored numerous ideas about what artwork should be featured both inside and outside of our waffle iron.   The Great American Waffle Iron is in many ways functional artwork that makes a great waffle.  With this piece we pay tribute to the thousands of American foundry workers that helped build our nation.

on ALL domestic orders

Keep in Touch!
Sign up and receive exclusive information and news about current and future products.
Thank you! Your submission has been received!
The form failed!?
Sorry about this, email us directly instead:
sales@appalachiancastiron.com
Categories
All
CustomInvoice
Partnership Products
Accessories
Waffle Iron
Skillet 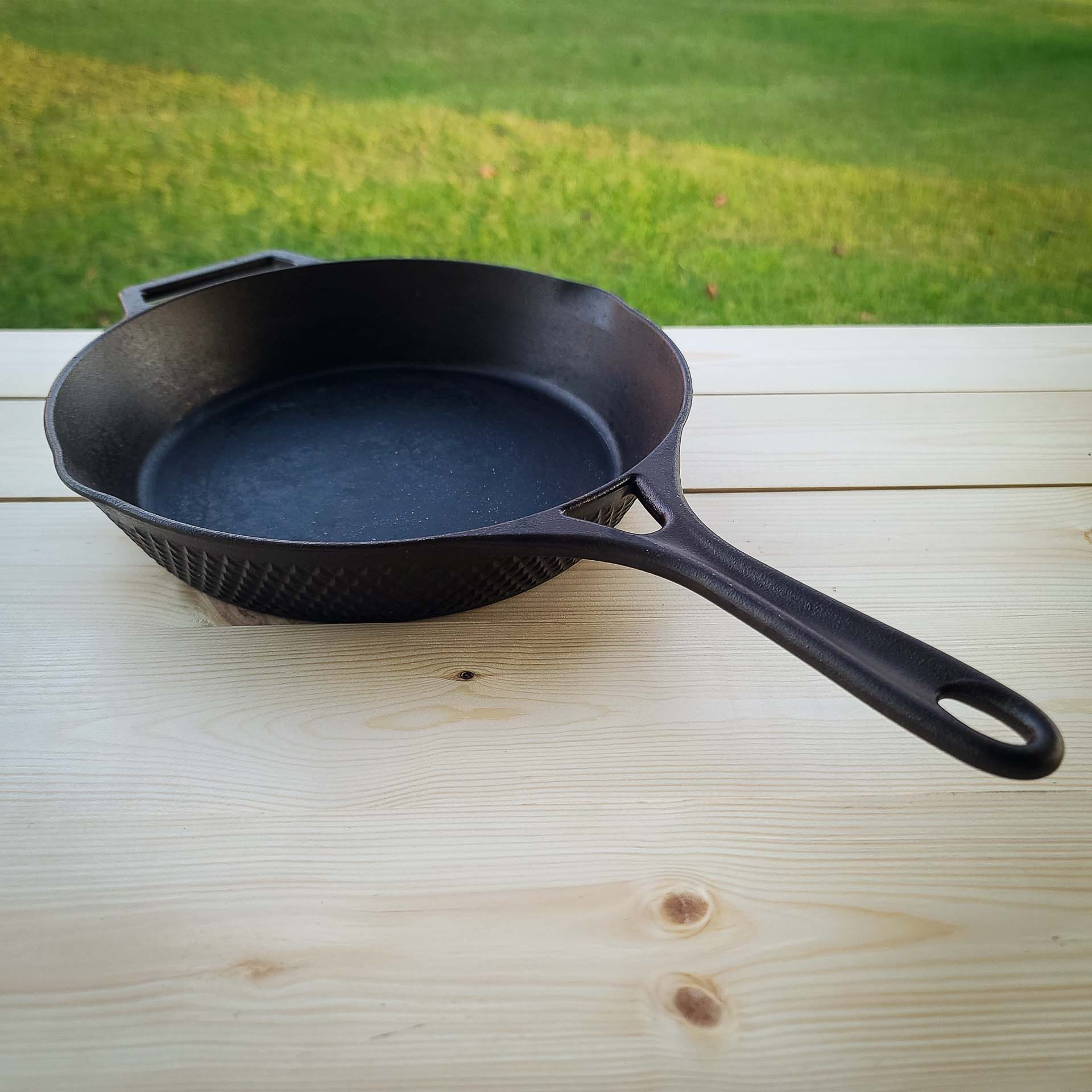 In stock at an introductory price of $95, the #10 Jeweled Skillet is designed for the cook that wants a superior “as cast” finish that seasons quickly, is more naturally non-stick, and captures the eye when presenting at the table. With an exceptionally smooth as cast surface, reminiscent of vintage pieces, our skillet does not need milling to give you an exceptionally smooth cooking surface. 5 Lbs. 10" across the top, 7.75" cook surface. A shade under 17" from handle end to handle end. Carat weight of 8646 with an estimated 2520 facets. 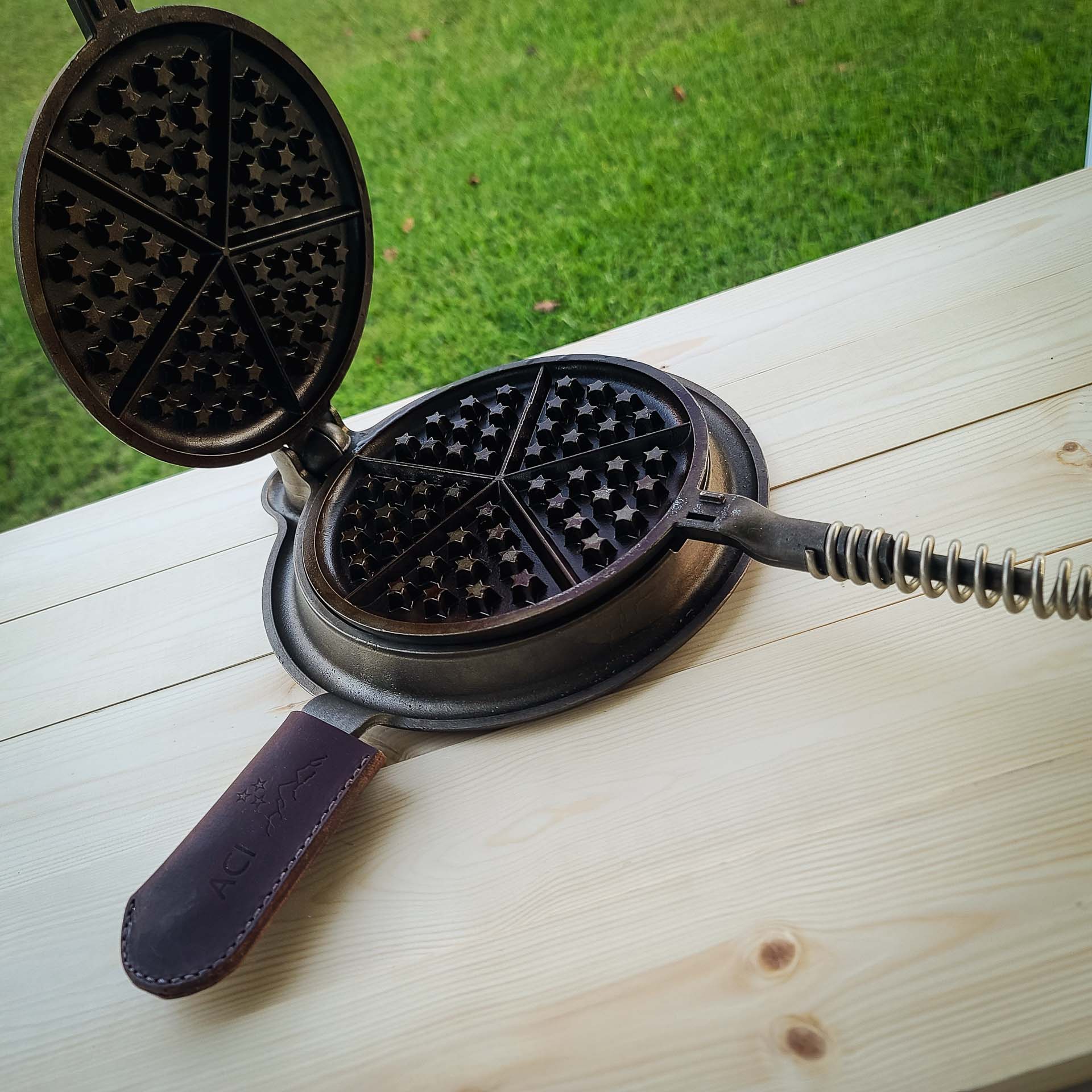 The Great American Waffle Iron is made for the patriot, the family that enjoys quality food, the cook, the baker, the traditionalist, the historian, the story teller. In stock and shipping. 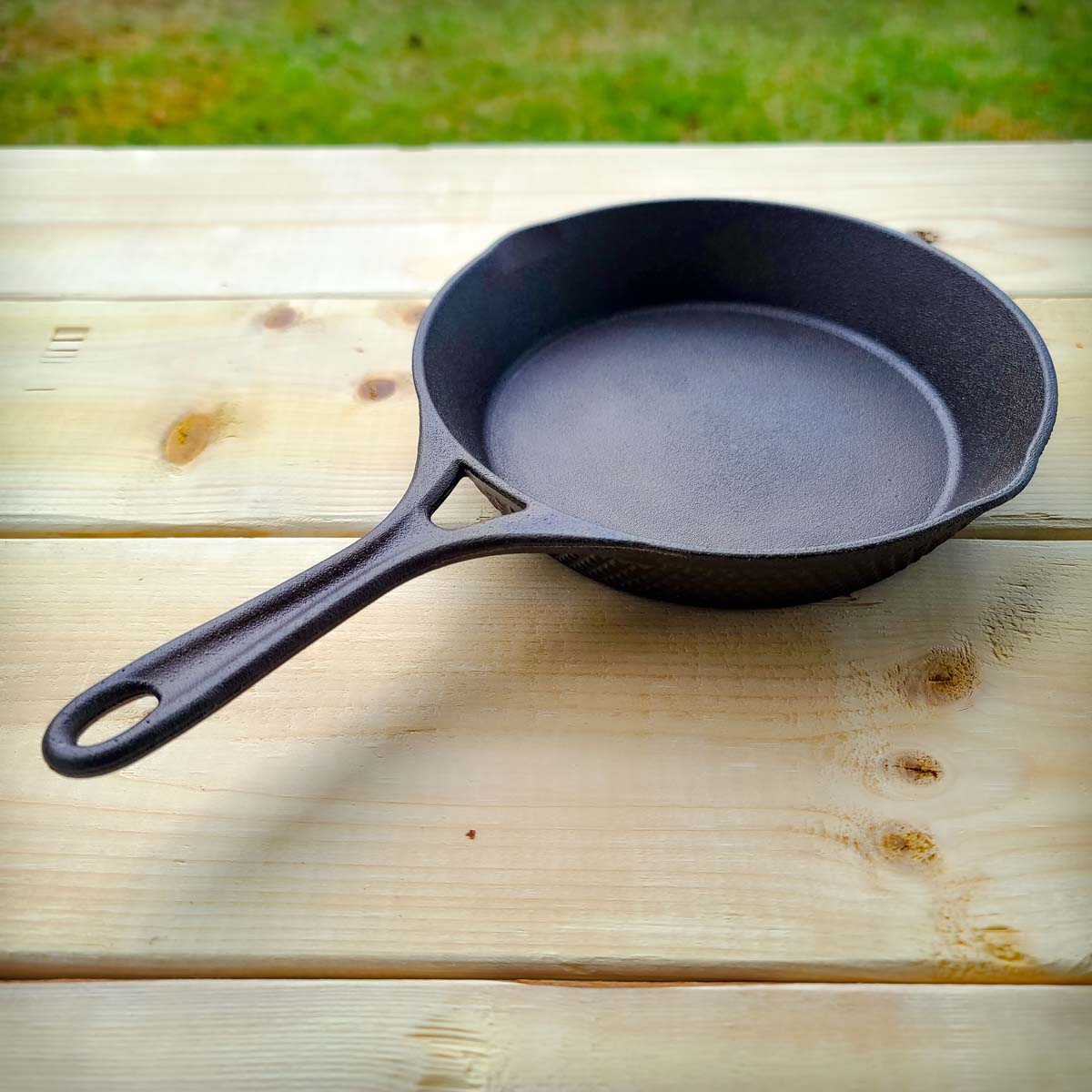 Tooling is complete for this Pre-Order item and we are waiting our turn at the foundry. At an introductory price of $69, the #8 Jeweled Skillet is designed for the cook that wants a superior “as cast” finish that seasons quickly, is more naturally non-stick, and captures the eye when presenting at the table. With an exceptionally smooth as cast surface, reminiscent of vintage pieces, our skillet does not need milling to give you an exceptionally smooth cooking surface. 3 Lbs. 8" across the top, 6" cook surface. A shade under 13" from the handle end. 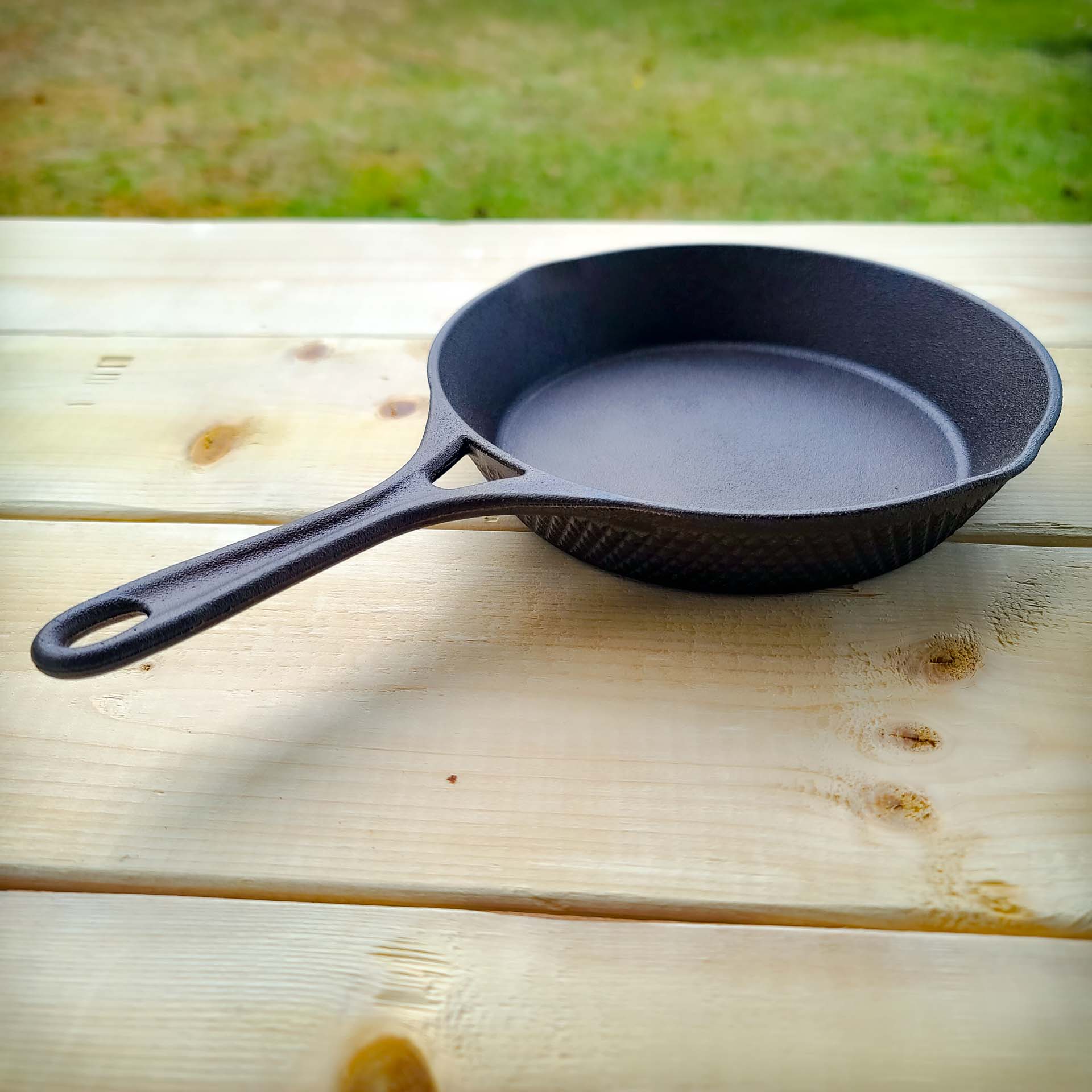 Our Partnership Skillet is limited to less than 100 pieces. They are clearly marked with a capital "P" under the handle (be sure to click the pictures and view additional images. You can find the P under the handle.) Normal production skillets will not have this mark. Your decision to purchase a Partnership skillet is particularly appreciated. Partnership skillets are on hand and ready to ship. 8" across the top, 6" cook surface. A shade under 13" from handle end to handle end. 3 Lbs. Our part number JS09171787, stands for Jeweled Skillet and the date code is September 17, 1787, the date members of the Constitutional Convention signed the final draft of the Constitution. All of our cast pieces have a date code as part of their part number representing an important date in US history. 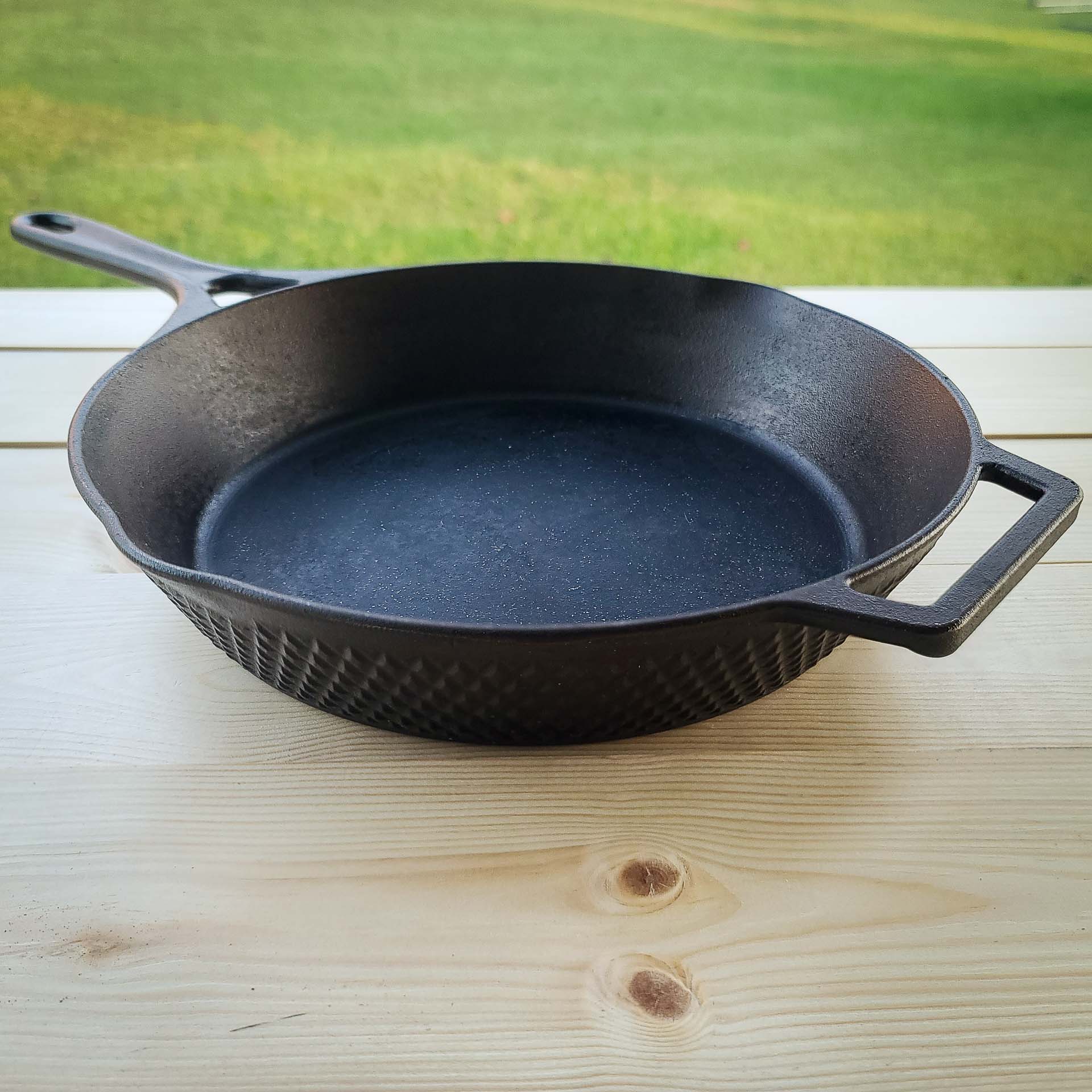 Our Partnership Skillet is only available in limited quantities and is clearly marked with a capital "P." Normal production skillets will not have this mark. Your decision to purchase a Partnership skillet is particularly appreciated. Partnership skillets are on hand and being processed. 10" across the top, 7.75" cook surface. A shade under 17" from handle end to handle end. Carat weight of 8646 (5 lbs. ) with an estimated 2520 facets. 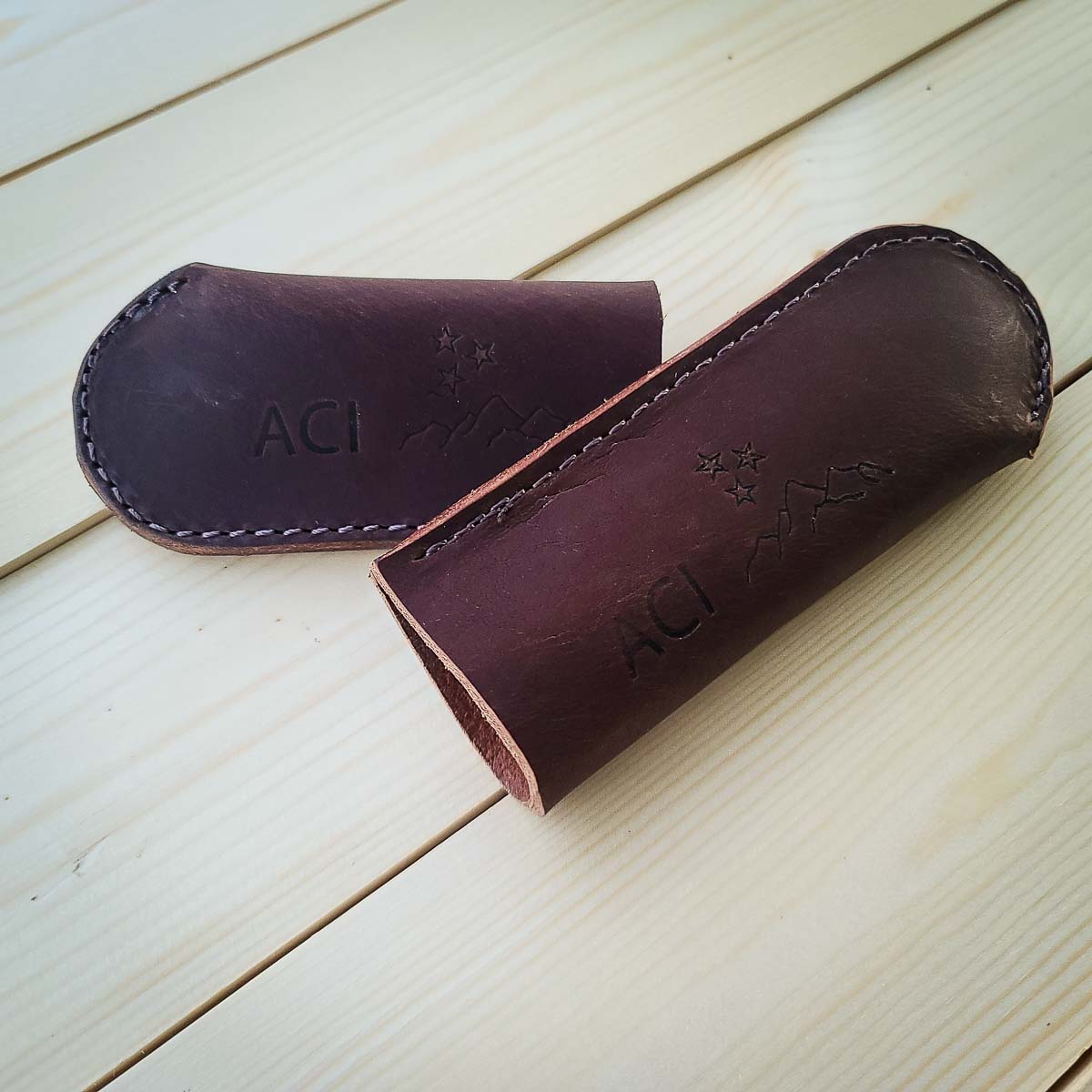 Our leather handle cover is produced in house and is a great helper when using your waffle iron or pulling your Jeweled Skillet from the oven. We produce these in house and are sure you will love them. (Yes, you can use them on other brands of cookware, too. We won't tell.) The design is a fold over seam design and is very ergonomic. There is stitching down one side and the bottom. The other side remains open so that the piece is semi-open and easier to use. We use the thickest leather we could source and still execute the fold. Product testers have been amazed at its resistance to heat. The 4.5 inch version works great with the waffle maker. It is useful with the skillet as well. The 5.5 inch handle cover is recommended if you have only purchased the skillet, it provides a fuller grip. 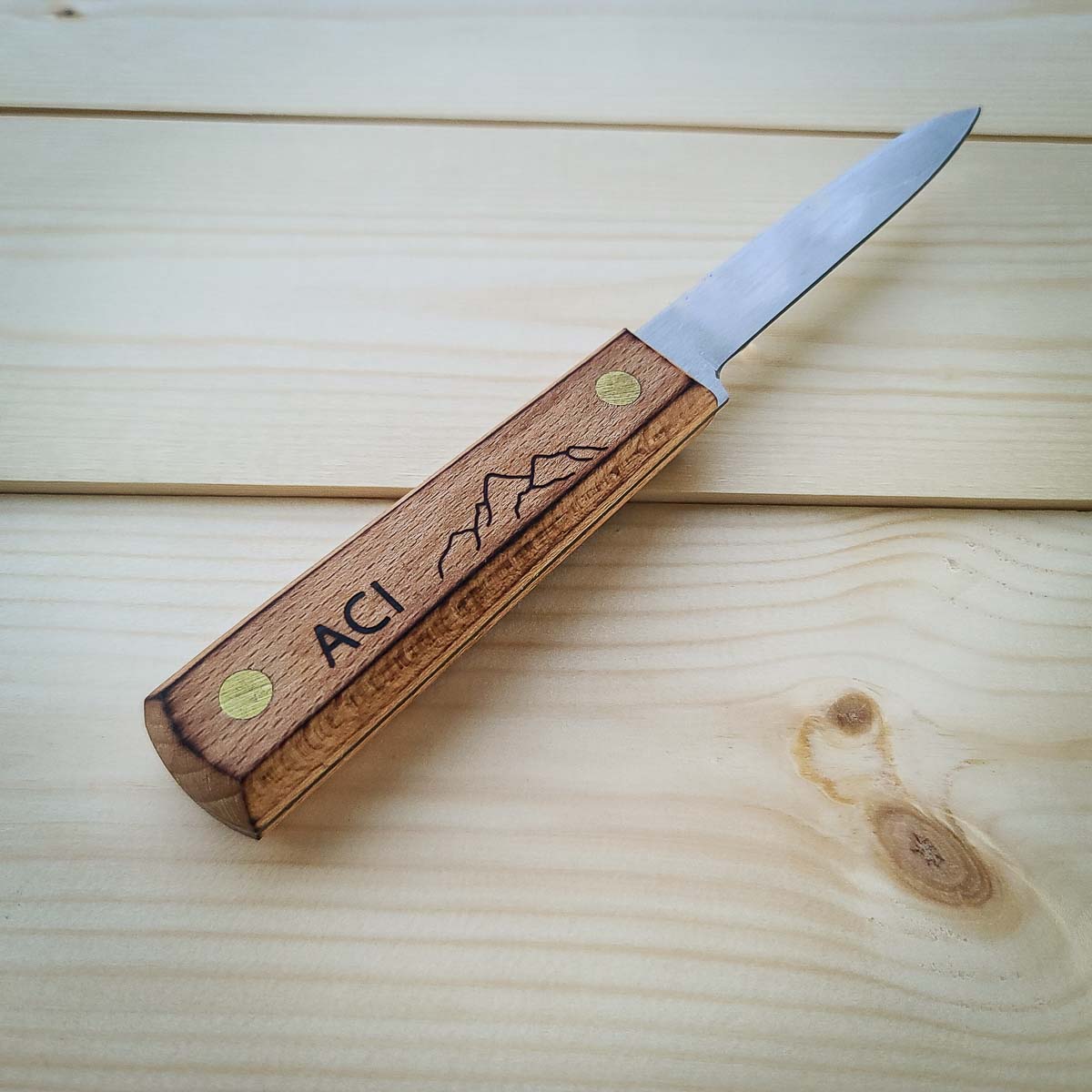 Our paring knife is made by Dexter Russel, one of the last main line producers of cutlery in the USA. Tony personally has a couple of their large cleavers for BBQ duty, and several spatulas, but the paring knife gets used multiple time a day.